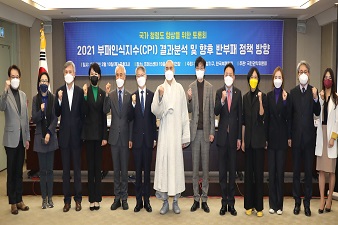 An open forum was held to discuss the future of anti-corruption strategies to take a leap forward into the world’s top 20 in the Corruption Perceptions Index (CPI).

Panels at this forum conducted discussions and gave presentations on the way forward on anti-corruption strategies and future tasks, making analysis of the result of the 2021 CPI.

The moderator of the forum was Moon Hyoung-Koo, an ambassador for anti-corruption affairs and professor emeritus of Korea University Business School, and the presenters were Lee Sang-Hak, a co-president of TI-Korea, and Lee Jeong-Joo, an editorial director of KACS.

The co-president of TI-Korea Lee Sang-Haksaid, “Korea has ranked 32nd out of 180 countries, scoring 62 points in the 2021 CPI. With its score up 8 points for the last five years since 2017, Korea improved in CPI the most quickly among OECD members, ranking 4th in the improvement rate,” adding that “the most noticeable feature of the 2021 CPI result is that Korea has shown steady improvements in the political and economic indicators, while still lagging behind in some other indicators. It is likely that fairness controversies surrounding the upper classes including politicians, corruption in public institutions such as Land and Housing Corp. (LH), and corrupt and unfair practices in the Korean society at large prevent us from rising in the Index.”

The editorial director of KACS Lee Jeong-Joo said, “Korea has risen consistently in the Index since 2017, showing the greatest improvement among the OECD members, but we have to consider that transparency in the Korean society as a whole has scored below 80 points and that Korea’s performance on CPI is relatively poor compared to its economic status.”

In addition, to maintain the upward trend, she suggested: transforming the traditional framework of anti-corruption policies to include ‘Proactive Governance’ in which public officials carry out their duties faithfully in the interest of citizens; changing the corruption control system currently centering on detection and punishment into the one that focuses more on the value of integrity; restructuring the pan-government anti-corruption policy functions; and strengthening the status of ACRC as a national corruption control tower.

Seung Jae-Hyun, a senior researcher of Korean Institute of Criminology and Justice, said, “It is necessary to restructure five corruption-related laws and integrate the management through unifying functions of public ethics.”

Kim Ae-Jin, a professor of public administration department of Gyeongsang National University, said, “It is necessary to seek ways to promote integrity policy in primary local authorities, given the result of Integrity Assessment of Public Institutions conducted by the ACRC which reveals high rate of fairness-hindering work order experience therein.”

Kim Mi-Kyeong, a financial editor of Seoul Shinmun said, “the role of media is also important. The media’s role as an objective and critical corruption watchdog should be more strengthened since corruption incidents may not be even perceived if the media does not actively cover it.”

Yoon Sun-Cheol, a head of Citizen’s Coalition for Economic Justice said, “When the government implements anti-corruption and integrity policies, it should consider consistency of principles, policy sustainability, establishment of regular implementation system the effectiveness of which is continuously monitored, and how people feel. And the role of civil society should be more expanded.”

The co-president of TI-Korea Lee Sang-Hak said, “the forum was very important and meaningful to take stock of what we have done as Korea’s CPI improved fast for the past five years and to discuss the way forward on the future anti-corruption policies.”

The ACRC Chairperson Jeon Hyun-Heui said, “I hope this forum will serve as an opportunity to reflect on the anti-corruption policy achievements we have made so far and to design the future of anti-corruption and integrity policy, in order to take a leap forward as an integrity advanced nation ranked in the world’s top 20.” 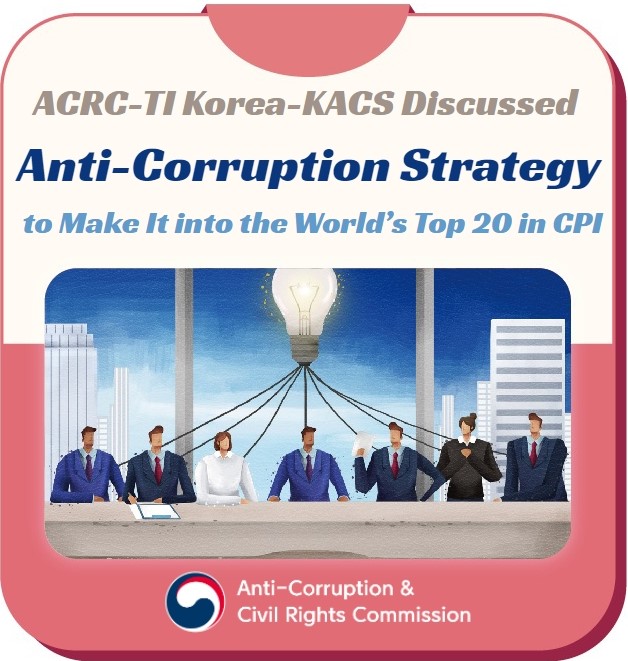